Further to our previous blog ‘Making The Best of Lockdown’ we thought we would update you about our composer, Richard.  We told you that Richard used to play in a brass band and was using his lockdown to reconnect to his previous passion of composing his own pieces of music. Well since then, Richard has been even more creative! 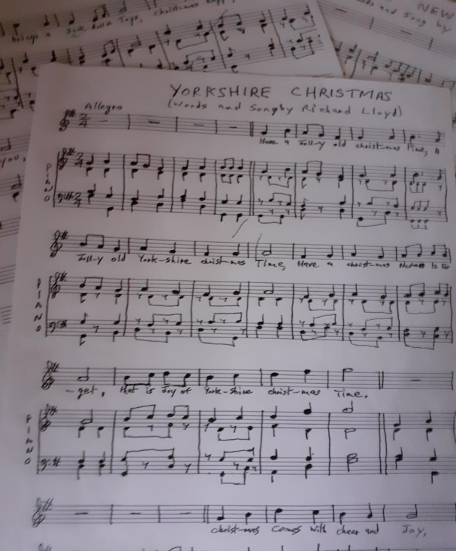 Richard was always keen to put lyrics to the pieces he composed and, although he had experimented with various poems in the past, he could never make the words and lyrics fit.

A poetry pack Richard was reading through lockdown inspired him to try his hand at writing his own lyrics.  Richard said that he had a couple of false starts but then the words began to fit and his ‘Yorkshire Christmas’ song started to flow!

Richard was delighted with the end result and was very keen to share his song with others.  We thought that after all his hard work it would be lovely to get Richard’s music out to a wider audience too.  This is when our Circles family jumped in to help.  Our colleague, Sharon Wilton (Community Circles Connector) introduced us to the musician (Jazz singer and trumpet player) Georgina Taylor who was happy to come on board. We were absolutely thrilled when Georgina told us that Richards’s song would work and that she will make a recording for us.

Richard was over the moon to hear that Georgina (and her band) will be recording and performing ‘Yorkshire Christmas’ and can’t wait to hear the finished result.

We are as excited as Richard to hear his song performed and look forward to sharing it with you soon.

Are you interested to find out more about Community Circles?

Are you interested to find out more about Community Circles?

The Difference A Circle Makes